Sicily a large island off Italy, and Tenerife part of Spain but nearer to North Africa offer quite different holiday experiences.

One of the main attractions in Sicily is the temple ruins in Aggrigento and we took the train across the island to visit them.  They were impressive and fun, although it was incredibly hot. In Tenerife we went to Siam Park, which was my highlight, which is a big water park.  In October, the queues were minimal, I think in the height of summer it would have been pretty hellish though.

Sicily has Mt Etna, Tenerife has Tiede.  We took the trip to the top of Mt Etna (not really the top but as high as you can go), which was really too expensive for what you got and sort of a waste of a day. Not a mistake we made in Tenerife where we just looked up and thought I wonder which of those pointy bits is the actual volcano.

Sicily definitely had a more arty and cultural feel, but that’s not really why people go to Tenerife.  The small art gallery we visited in Palermo had a weird fixation with a breast feeding Virgin Mary.  Tenerife had a lot of statues of animals like big prawns or crocodiles.  It’s up to you which you find more entertaining I suppose.

Oh Spain, why do you hate the veggies so much, what did we ever do to you?  In Italy and Sicily I had no problems finding food, and it was all covered in cheese (ok vegans might struggle).  In Tenerife, I thought I would do ok as it’s like England but warmer and all the menus were in English.  But then I remembered how hard it is to find veggie food in England.  There was always something I could get but mainly at the Italian restaurants!

Sicily, obviously has had new developments and shops and what not but still sells itself on it’s history as you can see from the ruined Roman arena in the middle of modern day Catania.  Tenerife (on the South side anyway) seems obsessed with newness and building and expanding new touristy bits. Although in a weird way it all looks stuck in a bygone era of the 1980’s when traveling from the UK to Tenerife was the height of glamour and excitement.

We took a bus from the South of the island to the North to visit the capital Santa Cruz.  It’s much more like ‘real’ Tenerife, whatever that means.  Or  maybe Tacky Town in Little England on the South side is actually the ‘real’ Tenerife and Santa Cruz is the anomaly.

END_OF_DOCUMENT_TOKEN_TO_BE_REPLACED 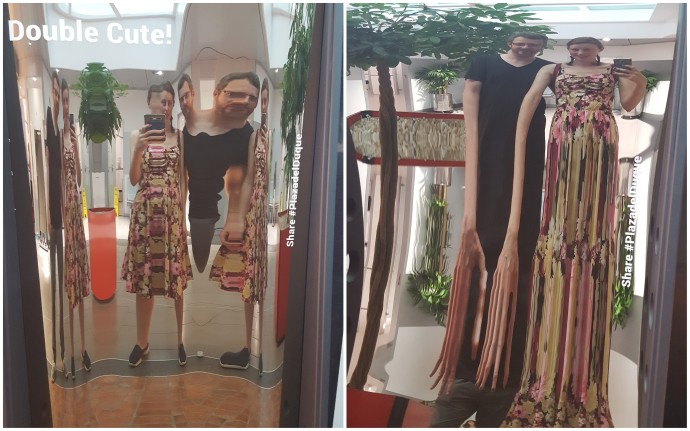 Just some silly snaps from the funny mirrors in the shopping centre near our hotel in Tenerife. 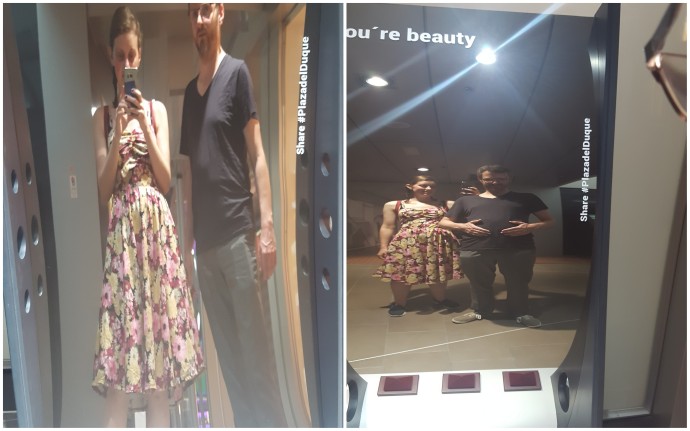 We wanted a super relaxing holiday when we went to Tenerife, but not a boozy Tenerife holiday, boyfriend was very clear that he wanted to stay somewhere ‘nice’.  So we decided to stay in uptown Costa Adeje, away from the boozy Las Americas but where it was kinda pricey.

We went for the Hotel Gran Tecande which is 5*.  It is pretty huge, although was far form capacity when we stayed there in September, and has a very impressive entry way, but one where I doubt anyone actually ever sits and therefore is entirely for show. There were a couple of different bars, which all played really loud live music every night, and it was really hard to get any sleep what with boyfriend constantly complaining about the noise. 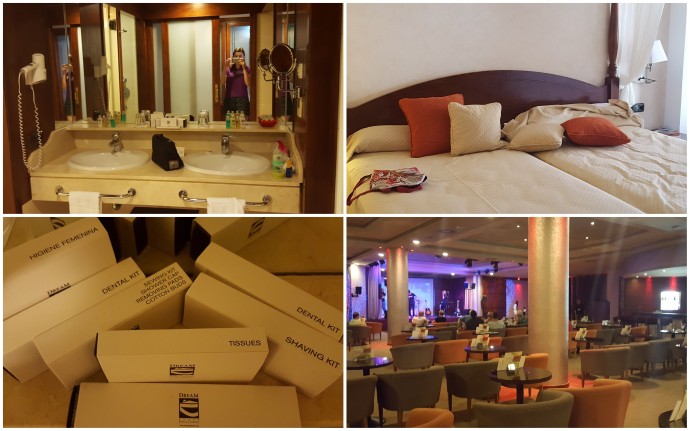 Our bedroom was a nice size with a huge bed, that European thing of putting two beds together which is normally fine but in this case they kept moving further apart!   I really liked the bathroom, the sinks, toilet, bath, and shower were all separate so you don’t have to wait for the other person to use the bathroom.  Although what the hell is this thing about putting glass doors on toilets???

The pool was disappointing, it wasn’t very big or deep and was only open 10-6pm, and you couldn’t use floats (it looked bigger on the pictures).  If the hotel had been full I think the pool would have been human soup*.  Location wise the hotel was in the nice place, only a few minutes from the beach and right next to a bunch of restaurants and a small supermarket.

There were definitely impressive parts of the hotel but a lot we didn’t use or need, and therefore the cost seemed more a little much.  I was looking forward to chilling by the pool but I couldn’t get any evening swims.  The live music was painful, it finished at about 11pm-11:30pm each night so not too late but surprising to have it on each weeknight.  Also there were two nights on at the same time competing with each other to audiences of about 5 people.

*boyfriend’s mum uses this phrase apparently, and I’m kind of loving it

We went for a walk from Costa Adeje to the little coastal fishing village of Caleta which is increasingly becoming taken over by the touristy nonsense. But it was still pretty and very hot, and we saw some crabs. 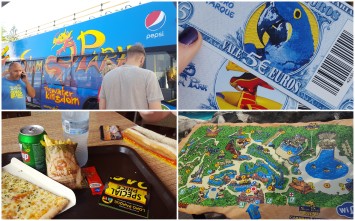 I was looking forward to Siam Park the most in our trip to Tenerife, it’s a large waterpark with a mixture of gentle and thrill rides.  And when in the UK is is ever going to hot enough to walk around all day in a swimming costume and get splashed with cold water. END_OF_DOCUMENT_TOKEN_TO_BE_REPLACED

I’ve been to Barcelona twice and recently come back from Rome (I’m a lucky girl!) and really enjoyed them both.  I think Rome was my favourite but there’s plenty to do and experience in both cities.  There are a lot of similarities too, but some differences… 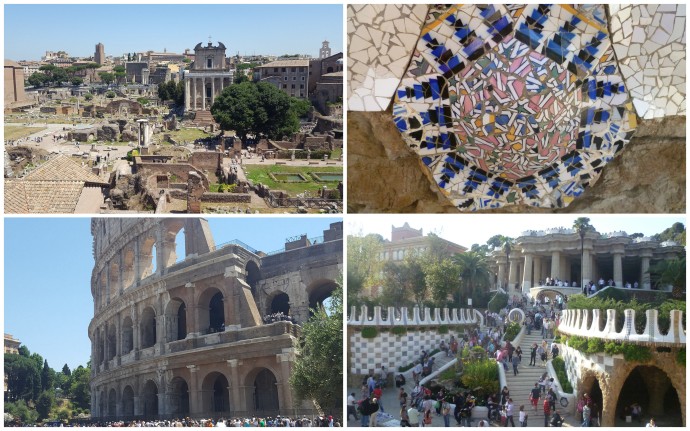 Both cities are historic and full of beautiful architecture.  But not much (in Europe) beats Rome for antiquities, some of the structures in the Roman Forum date back to the 7th century BC.  The city of Barcelona purportedly dates from 250 BC but some of the most striking architecture in Barcelona was designed by Antoni Gaudi from the 19th century. 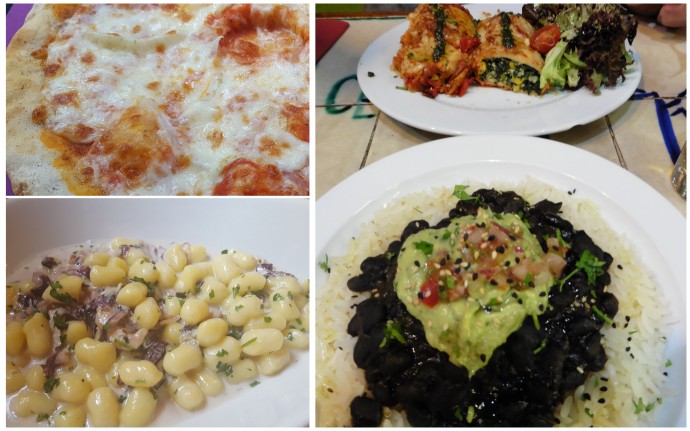 One of the reasons I liked Italy better than Spain is because getting vegetarian food was sooooo much easier!  Of course it depends where you go but there wasn’t a single place in Rome that I struggled to find a delicious option, and it’s hard to go wrong with pasta, cheese, and pizza.  On the other hand I spent most of my time in Spain buying overpriced cheese sandwiches.  But it did force us to find some vegetarian restaurants and get some dedicated veggie cuisine.

Of course I visited the Olympic stadiums in both cities.  As you can see the biggest difference between the two places is that Rome was ridiculously hot and in Barcelona it was pissing it down.  It’s hard for me to remember the Barcelona stadium without just thinking about how soggy it was.  We couldn’t go into the Rome stadium which was a shame, especially because it’s kind of out in the sticks but at the least the stadium is still being used for football matches.  In Barcelona, it all seemed somewhat neglected.  But there is a little Olympic museum next door and terrible cafe. 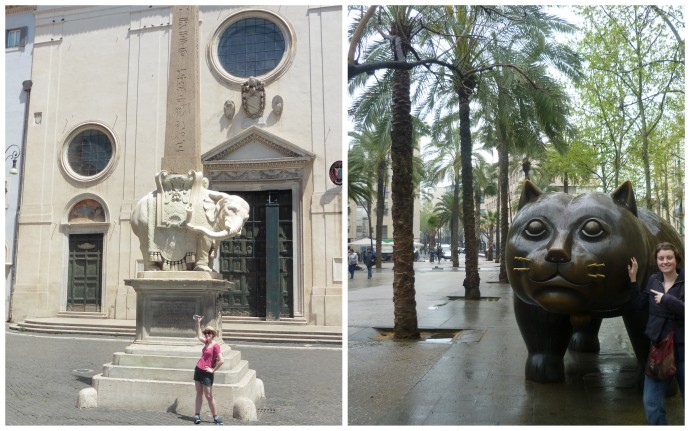 And both cities had odd quirky things, Rome had a elephant statue while the good people of Barcelona were keen on cats.  And I like standing in front of animal statues and pointing.

Postcards from the Olympics

A while back I shared the postcards I had received from Europe, but there are a few more that are Olympic themed.  I have been trying to visit as many Olympic stadiums as I can, not all have little gift shops but I picked up a few along the way.

I picked this up at the London Olympics (the 2012 ones not the 1948 ones…but all the contemporary postcards were awful I seemed to recall).

END_OF_DOCUMENT_TOKEN_TO_BE_REPLACED

Here are my favourite five places from the last few years of traveling.

The whole holiday was awesome, but the island of Mljet is particularly beautiful.  Most of it is a national park so it’s very green, we rent bikes and rode around the island until we reached a swimming lake which was a lot of fun to swim in.  You do have to pay for the ferry, and to enter the national park, and to rent the bikes if you want them so it did get more costly than anticipated.  Still I recommend.