Just a few shots from around Manchester. We wandered around the Northern Quarter where there are plenty of alternative, vintage, second hand, and ‘cool’ shops. I really like Manchester, shame it’s £30 return on the train.

Just a little shout out for Earth Cafe in Manchester which is a veggie cafe where they do a different menu everyday and you get 4 things for £6.  When we were there it included Dhal, Koftas, Roulade, Veg, Salad, Coleslaw, Rice etc. The food was nice although not filling enough for me so I got vegan chocolate cake and icecream to finish.

As a rule I typically avoid buffet places as I think the food is pretty mediocre and yet you somehow end up eating 12 times more than you normally would because it is all you can eat.

But after a long and tiring weekend we were walking though the print works in Manchester which is an old print works (duh!) which is now full of restaurants. It was about 4:45pm and we managed to get in for ‘lunch’ which was £9.99 and less than we would have paid anywhere else so I agreed to take a look. 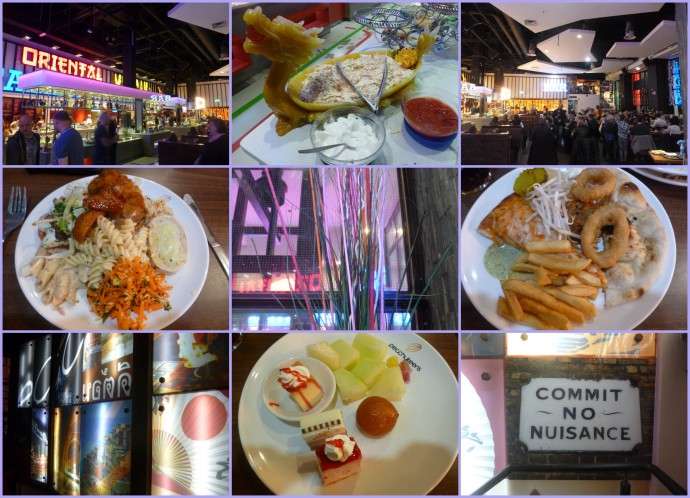 I was pleasantly surprised by how nice it looked and very hungry so we got a table and then dug in!  As with most buffets there was a range of cuisine (curry, stir-fry, pasta, pizza, grill, tepenyaki, salad, and desert) and a decent amount of veggie food.  Some of food, especially the chips, suffers from being left under a heat lamp but I got three plates full!